The Trump administration aides have told White House aides to make a decision on whether they intend to leave or stay through the November elections by the end of January, according to CNN.
The Latest on efforts to reduce tensions between North and South Korea (all times local): 10:50 a.m. South Korea's president says he's willing to meet North Korean leader Kim Jong … Click to Continue »
The U.N. peacekeeping chief condemned "violent repression" by Congo security forces against demonstrators protesting the refusal of President Joseph Kabila to step down and warned Tuesday that further electoral delays … Click to Continue »
Speculation about television host Oprah Winfrey running for president intensified after her speech at the Golden Globes on Jan. 7. Here are some political beliefs Winfrey has expressed over the years.
In a televised immigration meeting with lawmakers, Trump tried to reach a bipartisan deal and silence doubts about his fitness to be president.
The president also revealed his changeability on immigration, appearing to contradict himself and demanding a border wall even as he pledged his support for a “clean” DACA bill. 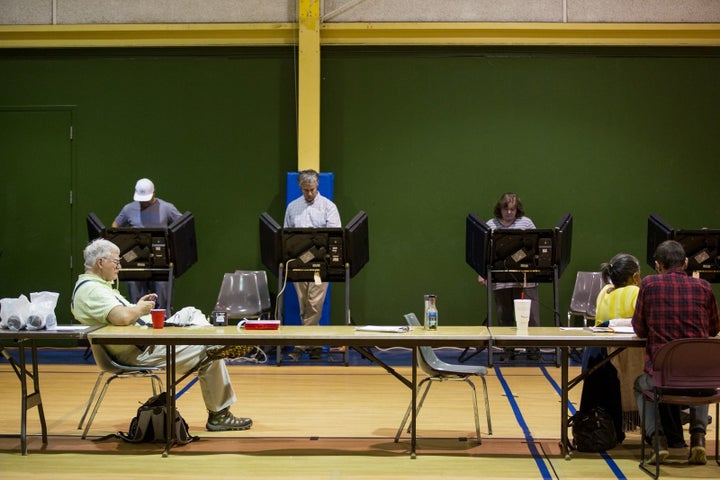 A federal court on Tuesday found North Carolina's congressional map to be an unconstitutional "partisan" gerrymander devised by the state's Republican lawmakers — and ordered the state to submit a new map by the end of the month.

The court gave the state until 5 p.m. Jan. 29 to submit a new map, but also began a process for appointing a special master who would draw a map if the state is unable to do so successfully.

The ruling comes as the Supreme Court is considering how partisan gerrymanders are considered by courts — in cases out of Wisconsin and Maryland — and it is expected that North Carolina lawmakers will ask to put the ruling on hold until the Wisconsin case, which was heard by the justices in October 2017, is resolved.

The possibility for delay, however, will soon run up against February filing deadlines for the North Carolina congressional races.

On Tuesday, the three-judge panel considering the case, in an opinion by Circuit Judge James Wynn, ruled that the North Carolina's map violated Equal Protection Clause, the First Amendment, and the Election Clause of Article I of the Constitution. Judge William Britt joined Wynn's opinion. Judge William Osteen Jr. wrote separately, but ultimately agreed that, under current Supreme Court case law, the state's plan was unconstitutional — although he did not agree that it violated the First Amendment.

Although the 205-page ruling went into great detail about the plan, the claims, and the law, the underlying facts were blunt: After the original redistricting plan was struck down as a racial gerrymander, lawmakers asked the person they had re-drawing the map "to remedy the racial gerrymander and "to use political data ... in drawing the remedial plan."

Rep. David Lewis — the senior chair of the state House's redistricting committee — "acknowledge[d] freely that this would be a political gerrymander," which he claimed was "not against the law," the court noted.

In considering the Equal Protection claim, the court reviewed expert testimony in the case at length to consider the claim. One expert for the plaintiffs computer generated 1,000 maps using "the non-partisan criteria included in the Committee’s Adopted Criteria: population equality, contiguity, minimizing county and VTD splits, and maximizing compactness."

The expert "found that none of the 1,000 plans yielded a congressional delegation of 10 Republicans and 3 Democrats — the outcome that would have occurred under the 2016 Plan — when he evaluated the sample." (The expert, Dr. Jowei Chen, went on to consider two other 1,000-map simulations to control for different situations — with the same result that none had as partisan a result as the actual map passed by the state.)

The court concluded that "the General Assembly intended to discriminate against voters who supported or were likely to support non-Republican candidates" and that "the 2016 Plan dilutes the votes of non-Republican voters and entrenches Republican control of the state’s congressional delegation."

In ruling the map unconstitutional under the First Amendment, the court looked to several areas of First Amendment law — including viewpoint discrimination ("prohibit[ing] the government from favoring or disfavoring particular viewpoints"), electoral speech dilution (addressing "the First Amendment’s prohibition on laws that disfavor a particular group or class of speakers"), retaliation ("prohibiti[ng] ... burdening or penalizing individuals for engaging in protected speech"), and election regulations (having "the potential to burden political speech or association").

"Against these many, multifaceted lines of precedent, the First Amendment’s applicability to partisan gerrymandering is manifest," Wynn wrote, before concluding the North Carolina plan violated the amendment.

The court also found that the plan violated provisions of Article I of the Constitution — clauses detailing that the "House of Representatives shall be composed of Members chosen . . . by the People" and the Elections Clause, which states that state legislatures have the authority to set the "times, places and manner of holding elections," subject to congressional alterations.

The court found the plan "exceeds the General Assembly’s delegated authority under the Elections Clause" because, in part, it "represents an impermissible effort to 'dictate electoral outcomes' and 'disfavor a class of candidates.'"

"[T]he 2016 Plan’s demonstrated partisan favoritism," the court concluded, "simply is not authorized by the Elections Clause."

It's been more than a decade since the leaders of the two Koreas have held a summit. Could it happen now? South Korean President Moon Jae-in told reporters Wednesday that … Click to Continue »
The Latest on the San Francisco mayor's race (all times local): 5:20 p.m. The contest for San Francisco mayor firmed up with eight candidates qualified to be on the June … Click to Continue »
The Trump administration has approved a $133.3 million missile defense sale to Japan to meet the escalating threat from North Korea -- by shooting down the rogue nation's own ballistic missiles.

Back in his community-organizing days, Barack Obama would have been the one fighting to save historic public parks from developers. Today, the 44th president finds himself on the other side of the underserved communities he once championed.

Grass-roots activists, conservationists and academics on Chicago's South Side say the Obama Presidential ...

A Cook County judge has resentenced a man to 75 years in prison for the 2007 shooting death of a high school student on a Chicago bus. Judge Matthew Coghlan … Click to Continue »
The White House will not allow companies to drill for oil off the coast of Florida, Interior Secretary Ryan Zinke said Tuesday after a brief meeting with the state's governor.

Republican Gov. Phil Bryant failed to acknowledge many of Mississippi's problems in the State of the State address, a lawmaker said in the Democrats' televised response. Bryant gave the speech … Click to Continue »
The Nevada rancher who led a 2014 armed standoff with government agents spoke Wednesday saying that it's up to people in states, not the federal officials, to manage vast expanses … Click to Continue »
A former acting chief of staff at the Cincinnati VA Medical Center has been convicted of a charge of distributing a controlled substance. Authorities say a federal jury in Cincinnati … Click to Continue »

CINCINNATI (AP) - A former acting chief of staff at the Cincinnati VA Medical Center has been convicted of a charge of distributing a controlled substance.

Sen. Toni Atkins will take over as California Senate's leader on March 21, Democrats announced Tuesday, becoming the first woman and the first lesbian to lead the chamber. The San … Click to Continue »

Rarely has a president granted the media such access to a high-level meeting inside the White House.

As President Trump met with senior congressional Republicans and Democrats on immigration Tuesday, his aides unexpectedly allowed journalists to record the lengthy discussion in the Cabinet room, with both sides airing their views ...

Gov. Kay Ivey's 2018 State of the State address given Tuesday. Remarks as prepared: President Marsh, Speaker McCutcheon, members of the Alabama Legislature, Chief Justice Stuart, justices of the Alabama … Click to Continue »
Two U.S. lawmakers are asking federal regulators to open an investigation into stock sales that reaped a $25 million profit for Intel's CEO several weeks before the company disclosed a … Click to Continue »

MONTGOMERY, Ala. (AP) - Gov. Kay Ivey's 2018 State of the State address given Tuesday. Remarks as prepared:

A cadre of civil rights groups along with several individuals have filed a petition with the Supreme Court in the hopes that a controversial appeals court decision that limits where gun stores can open within one county in California.

Gov. Scott Walker's job-creation agency has launched a push to convince Chicago-area millennials to leave the big city and relocate to Wisconsin in hopes of boosting the state's workforce. The … Click to Continue »
The Latest on a bipartisan meeting on immigration (all times local): 11:40 p.m. President Donald Trump suggests that an immigration agreement could be reached in two phases — first by … Click to Continue »
Mississippi parents who support using public money to send more children to private schools are pushing for action in the 2018 legislature. Leah Ferretti of Cleveland testified Tuesday that her … Click to Continue »
Page 4396 of 4432
« 1 … 4,394 4,395 4,396 4,397 4,398 … 4,432 »

Deprive a mirror of its silver and even the Czar won't see his face.